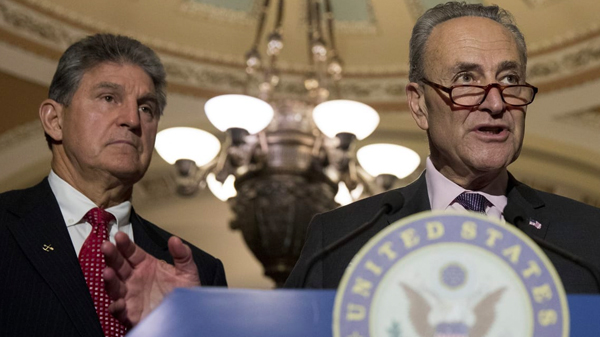 Attached is a column that I sent to every Republican U.S. Senator, and I want to share it with you.

This column outlines how we can beat the Joe Manchin-Chuck Schumer tax increase.

The two key steps follow:  First, use every Senate procedure to slow the bill down so it can’t pass before the August break. Second, every GOP Senate candidate running against a Democrat incumbent should demand that their opponents defend this bill.

During the August break, every Republican House and Senate candidate should challenge their Democrat opponents to defend the new, destructive, and unpopular Joe Manchin-Chuck Schumer bill.

Democrats hope to camouflage the bill by calling it the “Inflation Reduction Act of 2022.” In the business world, this title would lead to a lawsuit over false advertising. As I wrote in my latest best-selling book, “Defeating Big Government Socialism,” this kind of dishonest branding is standard procedure for the Orwellian party that modern Democrats have become. An accurate title of the bill would be the “Higher Taxes, Bigger IRS, and More Inflation Act of 2022.”

If Republicans aggressively communicate the details of the Manchin-Schumer bill, it will become prohibitively expensive for any Democrats to vote for it.

According to Rasmussen, “when told half the tax burden will fall on manufacturing industries, 63% say it is likely to make supply chain problems worse.” Only 19 percent of Americans think the bill’s so-called book tax will not affect the supply chain. I would add that increasing taxes on our manufacturing industries when we are competing with China is totally backward-thinking – and virtually suicidal in terms of national security.

Democrats should also take notice: The pain caused by the bad energy policies supported in the bill is undermining support for green policies. Some 66 percent of Americans now think reducing the price of gas is more important than reductions carbon emissions.

In fact, according to Rasmussen, 46 percent say more spending on climate change and clean energy programs will increase the price of gasoline, while only 21 percent think it will lower the price of gas.

When told the new Manchin-Schumer bill will lead to 86,000 additional Internal Revenue Service agents (the IRS currently has 78,661 full-time staff) the American people oppose it by 53 percent to 31 percent. But the intensity factor is huge. Some 29 percent strongly oppose the plan while only 9 percent strongly favor it. That is a more than 3:1 opposition at the extremes.

When people realize most of these IRS agents will not be going after billionaires and big companies – but instead will be auditing waitresses, uber drivers, self-employed people, and small businesses – I expect the opposition will grow even more intense.

As Rasmussen described it, “The new legislation being considered would double the size of the IRS so that the agency can conduct audits on an additional 1.2 million taxpayers every year. The agency has set a goal of increasing the audits of small business owners by 50%.”

Finally, despite the Democrats’ deeply dishonest title, the bill will increase the rate of inflation in the near term – not reduce it.

As the Daily Wire reported, the Wharton School of the University of Pennsylvania found that the bill “could lead to a slight increase in inflation over the next two years.” While the bill is expected to eventually reduce inflation after 2024, the Wharton School study found: “These point estimates are statistically indistinguishable from zero, thereby indicating low confidence that the legislation will have any impact on inflation.” So, not only will the bill increase inflation over the next few years, it will ultimately have no impact long-term.

The Manchin-Schumer bill is an enormous opportunity for Republicans – and a genuine learning moment for the American people.

It is crystal clear that the current economic performance failures of the Democrats are caused by the underlying destructive policies they promote. Further, Republicans should also clearly expose the consistently dishonest and hypocritical language Democrats use to try to fool Americans.

Every Republican candidate for House and Senate should challenge his or her Democratic opponent to a series of focused debates during the August recess. Republicans should assert that the Manchin-Schumer bill is a higher tax, bigger IRS, more inflation bill which will be bad for America. Every Democrat should be made to debate the point.

When Democrats try to hide behind the bill’s phony title and dishonest talking points, Republicans should be ready to challenge them on substance with clear examples.

Republican Georgia Senate Nominee Herschel Walker has already challenged Sen. Raphael Warnock to defend the bill. After saying for weeks that Walker was afraid to debate, Warnock is now avoiding his opponent.

Take note of every Democrat who refuses to defend the bill. Their reluctance will demonstrate just how bad it is.

This is a great opportunity for Republicans to define the real choice for November.

They should grab it now and not let go.